Click any feature description to learn more and select the desired product variation:

Try everything with the free trial.

We want your confidence first, not your money!

We email your license right after payment. No need to install new software. You can continue with your current installation.

Security is our top priority.

Your contractual partner is the leading ecommerce vendor Digital River.

Which product edition do I need?

The feature matrix on the shop page illustrates which feature is included in which edition. If you click a feature title, you get additional info about each feature.

Is the online shop safe?

Yes, buying from the online store is safe.

Our online shop is operated by one of the world's largest online shop operators, Digital River, which operates shops for Samsung, Microsoft, Lenovo and many more.

The key symbol in the address bar of your browser during the purchase procedure makes sure that your personal data will be securely encrypted during tramsmission: 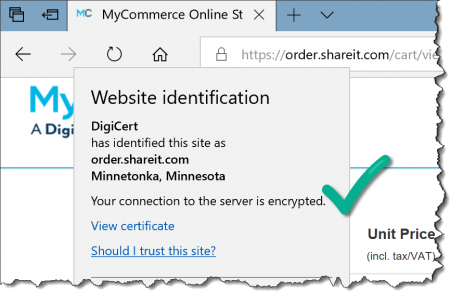 Yes, licenses are valid life-time for all software versions which are released during your maintenance term.

Make sure to keep a local backup of your software installation file as we do not maintain a repository of older software versions.

Only maintenance (free updates, upgrades and new versions) expire after the end of the selected maintenance term of either one, three or five years, but you can continue to use your existing installation without expiration.

How are monitors counted?

This page illustrates, how monitors are counted for ShareMouse:

This is a computer with one single display:

Note: The integrated laptop display counts as a display.

The Standard Edition is fine for two computers with one single monitor each.

Any other setup would require the Pro Edition.

This is a computer with two displays:

This is a laptop with one integrated display plus an additional monitor (aka "display") connected to that laptop.

If any computer has more than one display, you would need the Pro Edition.

This is a computer with three displays:

This example shows a laptop with one built-in display plus two connected external monitors.

The result is three monitors. Any computer involved with such configuration would require the Pro Edition as more than one display is connected.

What is included in the purchase?

Your purchase includes the right to use the software, as well as updates and upgrades, which we publish within the maintenance period you have chosen.

A special feature of our offer is that it also includes all new major versions with new functions.